Noroo Paint co. ltd. supports the mural project for the creation of the ‘Peace Village’ in Cheolwon-gun, Kimhwa-eup, South Korea, located near DMZ 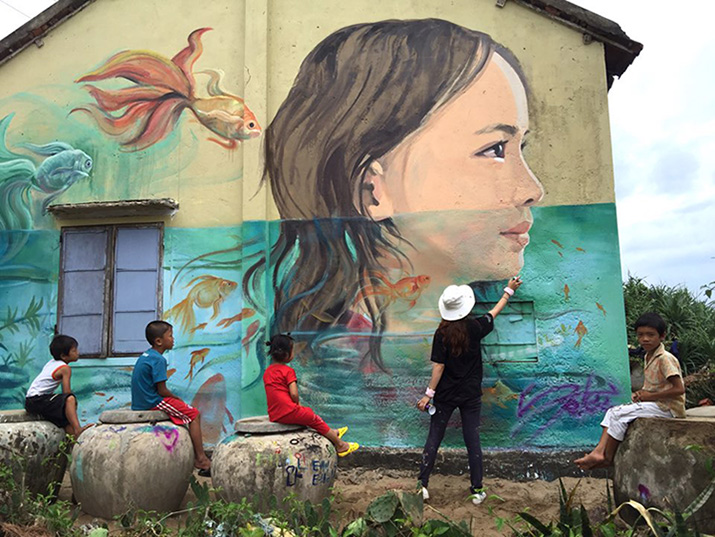 - Mural compositions of Peace between North and South Korea, in line with the Inter-Korean Summit.

- The South-North Korea summit began on April 27 and lasted for seven months until November,

- About 50 people participated, including Kimhwa-eup Government office, college students majoring in art in Gwangwon-do Province, and members of associations from Cheolwon Girls’ Middle and High Schools.

In line with the historical South-North Korea Summit, for the purpose of inter-Korean peace, Kimhwa-eup Government Office organized the mural painting project ‘Peace Village’, that will start on April 27. Walls of 70 houses which are adjacent to the main road passing through Dochang Village in Cheolwon Kimhwa-eup will be painted to symbolize “Peace”.

As a pivotal role of this project, Kimhwa-eup office of Gangwon-do province, high schools and Art college students associations were given around 7 months to finish the project (April 27th ~ November 25th).

Cheolwon Dochang Village of the ‘Peace Village’ project is a village near DMZ, and located on the road to North Korea, which is a great place to symbolize ‘Peace’.

As result of this mural project, and its geographic location, Cheolwon-gun has been named ‘Peace Village’, highlighting the brand. In the future, it is planned to develop it into a platform to promote community development through various cultural events, such as events related to inter-Korean cooperation and attracting tourism.

In the meantime, Noroo Paint co. ltd. has personally visited villages, and expressed the willingness to actively participate in supporting the creation of ‘Peace Village’, not only for houses that are suitable geographically, but also for old houses that need a renovation of old walls and a proposal for a color planning.

Noroo Paint said: “After completing mural painting with eco-friendly water-based paint for this mural project, we are planning to use our newly developed color protection product called ‘Cupid Clear Coat’, to preserve color for a longer time.” and it was also added: “We hope the ‘Peace Village’ will become a symbol of hope of the new inter-Korea peace era.”