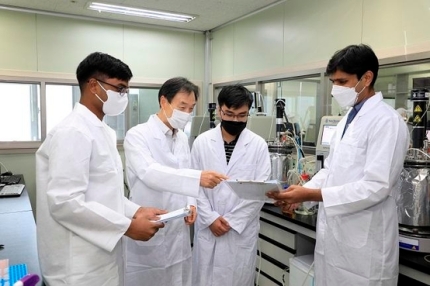 The ‘NOROO Bio Convergence Research Institute’ under Noroo Holdings co. ltd, well known as the holding company of Noroo Paint co. ltd., has been researching to improve the “quality of life” for consumers.

As a result of years of research in the development of sustainable future biomaterials. They have succeeded in developing technology for commercialization of eco-friendly biomaterials that can also improve environmental problems.

This material is called ‘3HP’ (3-Hydroxypropionic acid), which is used in natural materials such as corn and palm oil.

It is a material that is produced through bio process and also somewhat is unfamiliar to the general public.

3HP is called 'Platform Chemical' because it can be applied and developed in various forms.

It can be applied to a wide range of solvents.

It was ed as the third most important material among the ‘Top 12 future biomaterials’ by the US Department of Energy (DOE) in 2004, and is still highly appreciated as an important platform. Bio-based 3HP can be produced from natural materials, making it ‘sustainable’ and improving problems arising from existing chemicals.

First, it is a bio-material which could minimize the risk of human contact and skin exposure.

Due to the recent COVID-19 pandemic, plastic-based personal protective equipment such as medical masks, gloves, and visors has rapidly increased. Simultaneously, many human side effects have also been reported.

3HP can alleviate allergic reactions. Therefore, with this material, it is expected to expand the area of eco-friendly medical plastics from simple protective equipment to specialized equipment.

In addition, natural biodegradation is possible, so it can produce so-called “rotting plastic” (Bioplastic).

With the recent expansion of the ‘untact’ industry. Delivery volumes are being increased rapidly.

If we could produce “biodegradable bioplastics” with 3HP, we may expect similar effect of improving environmental pollution.

It is possible to replace the 'super absorbent resin' (a water absorbing material that absorbs up to 1,000 g of water per gram) with a bio-based 3HP material. Therefore, it is possible to minimize the side effects of the human body on the controversial chemical substances, and you can also lower the specific gravity of toxic substances.

The market value is expected to reach tens of trillion won depending on the scope of application.

For instance, ‘Super absorbent polymer’(SAP), which can absorb water, assuming that 3HP replaces SAP market, the market size is estimated to be at least *10 trillion won (*US BEROE research estimation).

In addition, the global scale is expected to reach tens of trillion won when considering the “polymer” (material for plastic) material market.

The NOROO Bio Convergence Research Institute has improved the low production yield and lowered the cost, which

was a major problem of conventional commercialization, through the development of highly productive strains, efficient

They have acquired domestic and foreign patents for related technologies, and ‘test production’ (in Demo Scale) in

the first half of next year for an optimized automated process. The completion of the facility construction is about to come.

Upon success, it will also secure process technology for the world's first 3HP Mass Production.