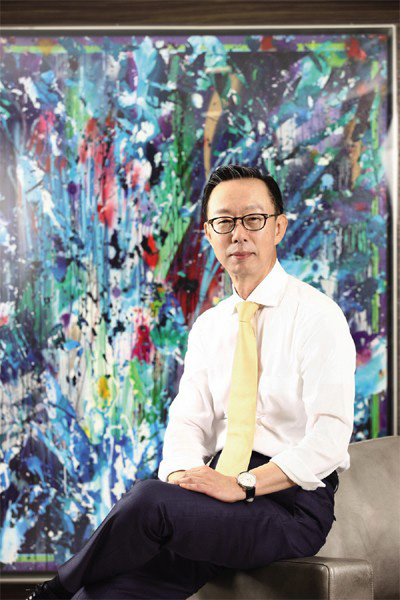 "I am very much honored to receive the 'Mecenat Award', that is awarded to people who have contributed to the promotion of culture and arts.

On the other hand, as an entrepreneur, I feel more responsible for supporting culture and arts."

Han Young-jae, the Chairman of Noroo Holdings co. ltd., recently expressed his feelings for winning the 'Mecenat people Award' at ‘2020 Mecenat Awards’ ceremony for contributing to the development of local culture through support for cultural and art organizations and infrastructure.

The Mecenat Awards, which celebrated their 21st anniversary this year, are awarded by the Korea Mecenat Association.

By emphasizing the social importance and expansion of the enjoyment of culture and arts, it supported the underprivileged to experience performances, thereby reducing the regional imbalance in cultural infrastructure. Chairman Han, who has supported numerous art organizations ranging from millions of won to hundreds of millions of won, has already been famous for being a thankful supporter in the classical music world.

Chairman Han said, "We have been focusing on support activities to directly visit the culturally marginalized class in our society. This is not a temporary sponsorship or marketing practice, but through long-term and continuous support, ‘contributing to society by reducing the cultural gap in our society'." is part of Noroo Group's social responsibility."

Chairman Han has sponsored numerous musicians. The case of Chairman Han's full sponsorship of Ham Shin-ik and Symphony Song Orchestra's ‘The Wing’ project has been reported to many musicians.

‘The Wing Project’ is a project designed to break down the barriers to regional imbalances in cultural infrastructure such as music performance halls and the entry of low-income people to cultural and artistic activities.

However, such an activity can never be accomplished without the help of companies. The reason why Ham Shin-ik and Symphony Song Orchestra have been running a solid growth path for six years since its foundation is same reason why the partnership between Chairman Han and Noroo Holdings co. ltd. has become the most important energy.

Chairman Han sympathized with the goal of resolving the cultural

imbalance by region and income, which the Wing project wanted, and began to support the symphony song orchestra with Ham Shin-ik.

Chairman Han, who immediately began helping Ham Shin-ik and the Symphony Song Orchestra. He started with a 5.5t truck, a moving stage worth over 200 million won, and sponsored the tour around the country.

Chairman Han expressed his impressions of the award, "Culture and art is an excellent medium that connects communication among members of our society."

As such, through the sponsorship of art groups, Chairman Han provides opportunities for art groups to be active on the stage, as well as helping more people to experience high-quality performances.

In addition, they are engaged in contributing activities that utilize the characteristics of corporate products. Noroo Holdings co. ltd., run by Chairman Han, is carrying out various activities using paints and colors as it has Noroo Paint co. ltd as its main subsidiary.

Representatively, it is practicing corporate social responsibility and 'Noblesse Oblige' through cultural contribution activities such as supporting urban regeneration projects and art projects.

Also there is a case where Noroo Holdings, led by Chairman Han, provided free paints to improve the environment of local communities such as libraries and zoos.

Chairman Han said, "NOROO Group has been practicing the spirit of entrepreneurship, he added, "We will continue to provide support so that we can close the cultural gap in our society and allow everyone to enjoy various culture and arts."